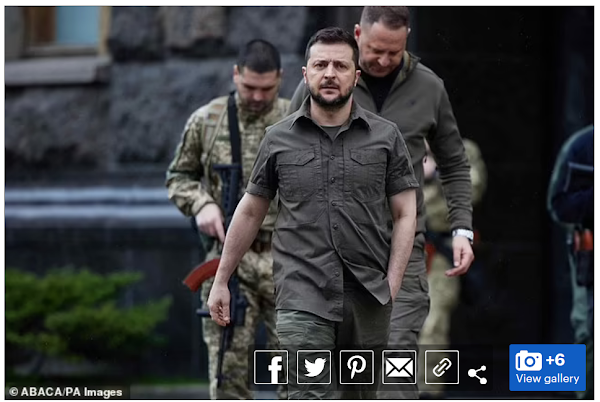 On Wednesday, the Russian military threatened to strike Ukrainian command centers in the capital, Kyiv, if Ukrainian forces continued to attack Russian territory. Pictured: Ukrainian President Volodymyr Zelensky arrives for a meeting in Kyiv on April 9, 2022

* It was not immediately clear what happened as regional authorities in the Kursk region gave contradictory accounts, omitting an earlier statement.

* Moscow threatened its forces to strike decision-making centers in Ukraine if what it described as attempts to carry out sabotage on Russian territory continued.

* Authorities in four Russian regions bordering Ukraine and in Russia-controlled Crimea announced that they would intensify security measures on Monday.

On Wednesday, the Russian military threatened to strike Ukrainian command centers in the capital, Kyiv, if Ukrainian forces continued to attack Russian territory.

“We are witnessing attempts by the Ukrainian forces to carry out acts of sabotage and strike on Russian territory,” the Russian Defense Ministry said in a statement. “If such situations continue, the Russian armed forces will strike at decision-making centers, including in Kyiv.”

The threat against Ukraine’s top leadership – including President Volodymyr Zelensky – came after Russian regional authorities claimed to hear gunfire on Wednesday near a Russian village in the western region bordering Ukraine.

WNU Editor: I know on Russian social media that there are many reports that Ukraine is carrying out daily artillery and missile strikes on Russian soil. Even the family of Patrick Lancaster, who lives in a village miles from Russian-Ukrainian territory, was hit by a missile a few days ago (link here).