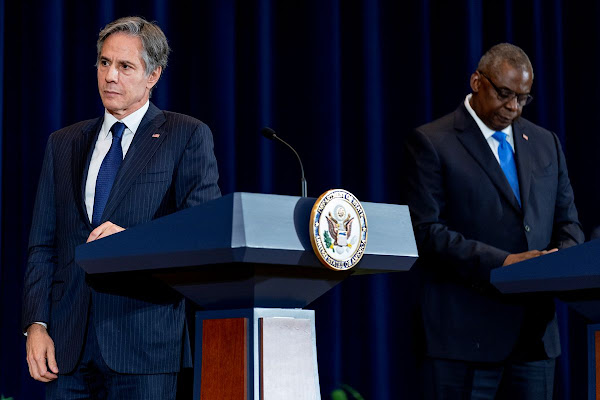 US Secretary of State Blinken and US Defense Secretary Austin host their Australian counterparts at the US State Department, Reuters/Pool

President Biden said he would like to visit Ukraine

* Politico reports that Secretary of State Anthony Blinken or Defense Secretary Lloyd Austin are likely to go to a visit to Ukraine made by European leaders.

* While in Poland last month, Biden said he wanted to cross the border into Ukraine but “they” wouldn’t let me

President Joe Biden said Thursday he would like to visit Ukraine and confirmed a report his administration is in talks about sending a top official to war-torn Kyiv.

“We’re making that decision now,” Biden said when asked if a senior member of his administration would make the trip. But when asked if he’d like to go, the president said, “Yes.”

WNU Editor: It will either be US Secretary of State Blinken or US Defense Secretary Austin. They might send Vice President Harris, but that would be a mistake. She does not show confidence.

Report: The United States is considering sending a high-ranking official to Kyiv — the week