The wife of a Russian soldier was reportedly recorded telling him of the rape of Ukrainian women during a disgusting front-line phone call.

Earlier this week, a disturbing clip surfaced of an intercepted call in which a woman is heard telling her husband he can rape women as long as he “uses protection” and does not tell her when he returns home.

The terrifying call was intercepted by the Ukrainian Security Services (SBU) in Kyiv and posted on its Telegram channel on Tuesday.

“The wives of Russian abusers are calling on their husbands to rape Ukrainian women,” the agency wrote on Telegram alongside the 30-second audio recording.

“This shocking objection by the State Security Department reflects the moral values ​​not only of the occupiers but also of their relatives, of whom 80% now support The war in UkraineThe agency claimed.

And now the pair has been identified by Freedom Radio Like Roman Bykovsky and his wife Olga Bykovskaya. 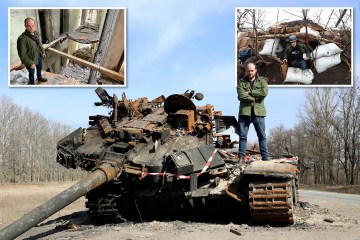 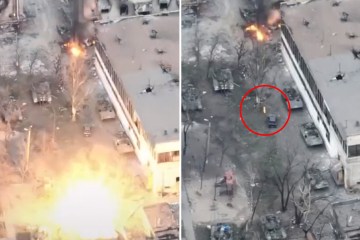 In the short audio clip, a woman is heard saying, “Okay, do it over there. Ukrainian woman over there. They raped them.”

She laughs before adding: “Don’t tell me anything, I understand.”

A man on the other end of the call replies: “So I must rape and tell you nothing?”

“Yes, I don’t even know,” the woman replies, before the two start laughing.

Then she adds: “Just use protection,” before the man replies again: “Okay.”

An investigation by the outlet, along with the authorities in Ukraine, found the phones used in the call.

Investigators were able to connect the two numbers to the accounts of Roman Bykovsky and 27-year-old Olga Bykovskaya, both of Orel.

Journalists were able to find Roman through a photo posted on social media by a friend with whom he had served in the same army squad in 2016.

The investigators eventually found more photos of Roman and established that he was a soldier in the 108th Guards Air Assault Regiment, which participated in the annexation of Crimea.

The couple with a four-year-old son moved to the area in 2018.

The outlet reported that journalists tried to contact the pair several times.

Roman reportedly responded and denied that he was still in Kherson before stating that he was not the person in the audio clip.

His wife also answered and confirmed that her husband is in Sevastopol being treated in a hospital.

Then she proceeded to delete her social media account.

Last weekend, a Russian soldier was arrested after allegations Filming himself raping a child In Ukraine before sending the video to a fellow reporter.

Alexei Bychkov, 24, was arrested in Russia on Saturday after the despicable video clip surfaced on social media over the weekend.

The day before, a threat about Bychkov had been posted on Twitter detailing the horrific abuse.

In the footage, he reportedly said he was recording a “ferocious video” before assaulting the child.

It is not known exactly when and where the footage was filmed.

So should I rape and not tell you anything?

Russian soldier to his girlfriend

In another shocking act, she is 11 years old Russian forces raped a Ukrainian boy In front of his horrified mother she is tied to a chair and forced to watch.

The Ukrainian Parliamentary Commissioner for Human Rights, Lyudmila Denisova, said that Russian forces had raped the boy in the town of Bucha.

On April 8, Denisova said that Russian soldiers had kidnapped more than 120,000 Ukrainian children.

“There is no place on earth or in hell where racist criminals can hide from retribution!” Denisova wrote invoking Article 27 of the 1949 Geneva Convention, which protects civilians from persecution during war.

“The occupiers must bear the utmost responsibility!”

She said that 25 girls and women between the ages of 14 and 25 were “systematically” raped in Bucha while being held in a basement.

At least nine of them are pregnant now.

“The Russian soldiers told them they would rape them to the point that they didn’t want to have sexual intercourse with any man, to prevent them from having Ukrainian children,” Denisova said.

Last week, Ukrainian official Oleksandr Vilkul A A 16-year-old girl and a 78-year-old woman were raped in eastern Ukraine Near the Ingulets River.

“There is news that makes my blood run cold,” said Vilkul, head of the military administration in Kryvyi Rih, in a video posted on Facebook.

While rebuilding a peaceful life in the liberated villages of Kherson region, a task we are currently working on, we are faced with more and more horror stories.

“For example, the rape of a 16-year-old pregnant girl and a 78-year-old grandmother in a village towards Ingolets.”

Reports of Russian sex crimes against Ukrainian women were exposed last month, after two of Putin’s soldiers were accused of killing a man before raping his wife in front of their child.

Prosecutor Irina Venediktova said that a Russian soldier shot the father after he broke into the house in a village near Kyiv before the couple brutally attacked his wife.

She said the savages raped the woman “repeatedly” in the terror attack – and “threatened her with violence and weapons”.

Mrs. Venediktova claimed that despicable soldiers threatened her child who was at home at the time – and claimed that one of the men was drunk.

She said that the police have identified one of the soldiers and he is now wanted. Kyiv Independent reports.

His identity has not been released – and it is understood that the other suspect has not yet been identified.

she said in statment On her official Facebook page: “Let’s find every villain and make him accountable through the strictness of the law.”

Moscow has denied allegations of sexual crimes against people in Ukraine.

President Zelensky told the Lithuanian Parliament on Wednesday: “Hundreds of rapes have been recorded, including those of young girls and very young children. Even a child!”

A Ukrainian rights group told the United Nations that the Kremlin is using rape as a weapon of war.

“This is just the tip of the iceberg,” she told the United Nations.

“We know and see – and we want you to hear our voices – that violence and rape are now being used as a weapon of war by the Russian invaders in Ukraine.”

Help those fleeing conflict with The Sun’s Ukraine Fund

Images of women and children fleeing the horror of devastated Ukrainian towns and cities made Sun’s readers shed tears.

Many of you would like to help the five million trapped in the chaos – and now you can, by donating to The Sun’s Ukraine Fund.

Donate as little as £3 or as much as you can and every penny on Earth will be donated to the Red Cross to help women, children, the elderly, the infirm and the wounded.

The Ukraine Crisis Appeal will support people in regions currently affected and those likely to be affected in the future by the crisis.

In the unlikely event that the British Red Cross raises more money than can reasonably and effectively be spent, any surplus funds will be used to help them prepare for and respond to other humanitarian disasters anywhere in the world.